Doug is a hardcore barbeque enthusiast and connoisseur. While he spends most of his time on editing and research, he sometimes moonlights as a product tester for particularly interesting things he comes across. 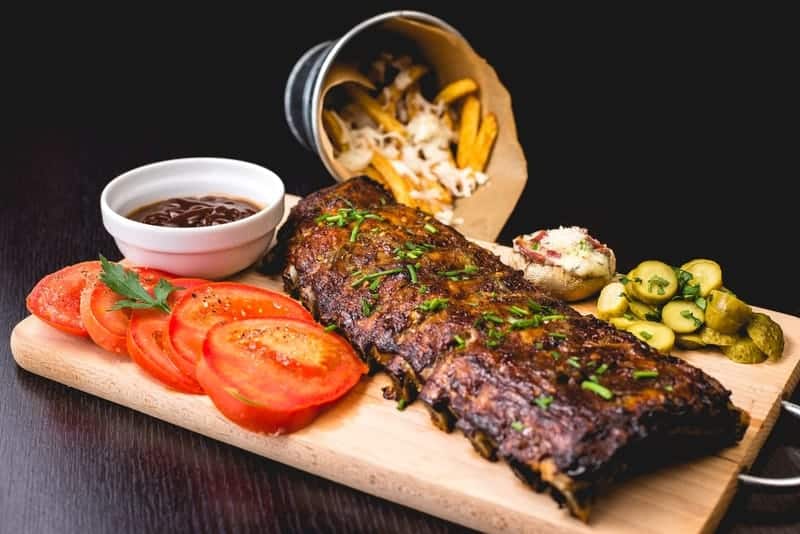 Memphis might just be the most happening city in the American Southeast!

With a long and storied history, it has played home to varied and fascinating cultural trends since its founding in 1819. While its past has not been all sunshine and roses, today it can stake a genuine claim to being a mecca for blues, barbecue, soul and rock n’ roll.

Whether you’re thinking of visiting to take a stroll down famous Beale Street, or looking to go see The King’s shoes at Graceland, one thing is always true:

As one of four recognized styles of regional barbecue in the United States, Memphis’s unique blend of cooking methods and spices is as signature as the city’s famously groovy sounds. In this article, we’re going to be taking a look at the best BBQ in Memphis from 10 of its most well respected restaurants.So what are you waiting for? Let’s dig in!

What Is Memphis Style BBQ?

Alongside Carolina, Kansas City, and Texas, Memphis Style BBQ holds a place as one of four dominant regional styles of US barbecue. But what makes it stand out from the other three?

To really be able to appreciate all the delicious barbecued goodness that Memphis has to offer, you’ll need to know a little bit more about their style. Here are 3 things that make Memphis Style BBQ different:

#1: The Meat is Barbecued Dry

With a definite focus on pork rather than chicken or beef, Memphis BBQ is almost always slow cooked dry, most often in a pit smoker. This sets it apart from Kansas City, Texas, and Carolina barbecue right away: By focusing on the quality of the meat first, Memphis barbecue emphasizes cooking technique over marinade or spice recipes.

Compared to the other three regional styles of barbecue, Memphis barbecue will almost always be spicier and more pungent. It all starts with the dry rub that they use prior to smoking or pit cooking: Often heavy on black pepper, paprika, and pungent herbs, it has a signature kick that’s hard to find in any other barbecue style.

Barbecue in Memphis is almost always served just the way it was cooked — dry, with most of the flavor coming from the cooking method and the excellent quality of meat. For Memphis natives, it’s totally natural to eat their barbecue just like this.

To add a signature flavor, though, most restaurants and chefs will create a uniquely flavored sauce. While Kansas City and Texas style barbecue sauces will have a noticeable sweetness, and Carolina barbecue focuses on vinegar, Memphis style BBQ sauce is thinner and spicier. They use it more as an accent to already delicious meat than a dominant flavor.

So get your sauce on the side, and try a few bites “dry” before you add some “wet” to your Memphis style BBQ!

The Best Places to Eat BBQ in Memphis

In a city that holds the Guinness Book of World Records record for largest pork barbecue contest in the world, you’ve got to have some serious chops to survive in the restaurant biz. Each one of these 10 BBQ joints has stood the test of time by creating a signature flavor that you can taste any time you visit there.

In no particular order, here are the 10 best BBQ restaurants Memphis has to offer:

With the original location founded in 1979 by Jim Neely, it’s been cranking out some of the most highly lauded smoked ribs in Memphis ever since. People Magazine once rated them the second-best barbecue in the entire United States, and USA Today proudly proclaimed their barbecue pork sandwich the best in America.

If you’re absolutely dying for some Memphis-style BBQ, Interstate’s got you covered: They even have a small location in the Memphis International Airport near Gate C7. Word on the street is, their barbecue sandwich is just as good there as it is at the original location.

Recently spreading widely from its original location, Central BBQ has made a reputation for being able to accommodate every barbecue fan around: They smoke almost everything, including chicken, turkey, sausage, pork, beef, and even mushrooms for a vegetarian option.

All four of their locations use the same secret combination of dry-rub spices combined with a 24-hour marinade and slow cooking over smoked hickory and pecan woods. This attention to detail gives everything they make a melt-in-your-mouth texture, with just enough heat to make it interesting. Go to their original location in Midtown for the best interior decorating.

As far as Memphis BBQ goes, believe us when we tell you that Charlie Vergos’ is legendary. With a dry-rubbed rib recipe dating back to the 1940s, they have the greatest claim to old-school fame of any BBQ joint in the city.\

So what makes their ribs so darn special? It’s a combination of a spice blend originally taken from Papa Vergos’ Greek chili recipe and a hot, fast cook over charcoal. Memphis natives swear by this restaurant, and for good reason: They treat their staff like family, and many of their waiters and cooks have been working there for more than a decade.

Do we really need to say more than barbecue baloney sandwich? Okay, we will anyway: Cozy Corner has been making authentic Memphis BBQ since 1977, and is well known for their continually innovative approach to what they can throw into their smoker.

Equally famous for their whole smoked turkeys or cornish game hens around the holidays, Cozy Corner offers sauces in a range of spices from mild to super hot. If it seems like they do just about everything well, that’s because they absolutely do: From racks of ribs to BBQ half-chickens to their to-die-for sweet potato pie, you can’t go wrong with anything on the menu.

Take a trip just outside of Memphis proper, and you’ll be rewarded with this Germantown classic that’s housed in a converted country store. Operating since 1981, today they’re best known for being the epicenter of a Memphis culinary phenomenon: Barbecue Nachos.

Piled high with smoked meats and loaded with cheese and peppers, these nachos and many other BBQ meats have been served to the likes of Faith HIll, Tim McGraw, Jimmy Buffett, Aerosmith, and The Eagles. It’s no wonder, then, that Commissary is regarded as an all-around great excuse to get out of the city and head to the Tennessee suburbs.

Founded in 1983 by Andrew and Rose Pollard (from which the restaurant gets its name), A&R started as a dedicated fast-food takeout for barbecue. Once word got out that they were smoking up some of the best meats that Memphis had to offer, though, they expanded to offer indoor dining and catering, too.

The rib sandwich is definitely A&R’s signature serve. Piled bones and all between two slices of white bread, the sandwich is loaded up with slaw and a signature thick sauce that’s uncommon in Memphis BBQ. You’ll have your work cut out for you as you chew and pick your way through this deliciously messy piece of Memphis culture.

Did you know that Memphis chefs and diners have a habit of turning just about anything into barbecue? For evidence, look no further than The Bar-B-Q Shop’s famous barbecue spaghetti: An amazingly messy (and incredibly tasty) side, you’ll not find anything like it outside of Memphis.

They’ve even been voted #1 ribs in the country by the Food Network, and offer their secret recipe barbecue sauce bottled and ready to go home with you. If you can’t make it to Memphis anytime soon, ordering a few bottles of their sauce and dry rub is definitely the next best thing.

No website! You’ll have to visit them in person at 1762 Lamar Avenue.

Payne’s has gone out of its way to maintain the exact recipe that made them successful in the first place. Family-owned and operated, they’ve yet to come into the world of Google Maps and online reviews — and this has let them focus on what they do best.

With some of the messiest, drip down your chin sandwiches that you could possibly find in Memphis, Payne’s piles each of their plates so high with chopped pork and sticky sauce that you just might need a spoon to eat it all. Their minimalist menu is a refreshing contrast in a city that will put barbecue sauce on anything and everything.

Maybe the best place in Memphis to have BBQ for breakfast, Tops might also be the only place to do so. Opening their doors as early as 8:30 at all of their 15 locations, this locally-run chain has made Memphis BBQ available on almost every corner.

They’ve been doing it for almost 70 years, too! There’s no better place in Memphis or the surrounding area to get hamburgers or cheeseburgers made with the same care and attention as their pit-smoked barbecue. Styled like an old-school diner, it’s a fantastic place to go and soak up the atmosphere of this amazing city.

Voted the #1 BBQ joint in Memphis 22 times in the past 35 years, Corky’s has some serious street cred in the Memphis BBQ scene! They’ve been so popular, in fact, that you can now get their famous meats at locations across Tennessee, Mississippi, and Arkansas — as well as having their sauces and rubs mailed to you anywhere in the country.

From fried pickles to smoked drumsticks, dry rub ribs, and amazingly rich pulled pork, their whole menu reads like a BBQ lover’s dream. Don’t miss out on their Zoe’s Banana Pudding as a sweet treat to finish your meal!

Home to the world’s largest barbecue cooking championship, it’s clear that there’s one perfect time to visit Memphis for their BBQ:

Memphis in May is the name for this yearly extravaganza of all things pork, smoke, and spice. Drawing an incredible number of visitors each year, it’s the perfect way to sample everything the city has to offer in one place.

Starting at the beginning of May with the Beale Street Music Festival, you can soak up some of the musical culture that has made this city a world-famous destination. Each year alongside this, Memphis in May honors one African nation that has been crucial to their heritage, offering performances, exhibits, speakers, and international cuisine throughout the entire month.

But all of this is just a lead-up to the main event: The World Championship Barbecue Cooking Contest, a 4 day and 3 night event drawing barbecue teams from Memphis and around the nation to compete for the highest honors in BBQ taste. Purchase tickets for all four days of the event, and you’ll get to try more barbecue than you ever dreamed of.

Final Thoughts on the Best BBQ in Memphis

Due in large part to its multi-ethnic heritage and position as a central hub of shipping, Memphis Style BBQ has developed into an incredibly unique style with a flavor all its own. While you can find amazing barbecue just about anywhere you go in the city, using our list of the most famous BBQ joints should definitely be your jumping off point to exploring all the city has to offer.

Thank you for reading, and we wish you luck in all of your barbecue adventures! If you are interested we also have the best bbq books listed and reviewed here.

What Is Memphis Style BBQ?

The Best Places to Eat BBQ in Memphis

Final Thoughts on the Best BBQ in Memphis