The Easiest Way to Carve a Turkey 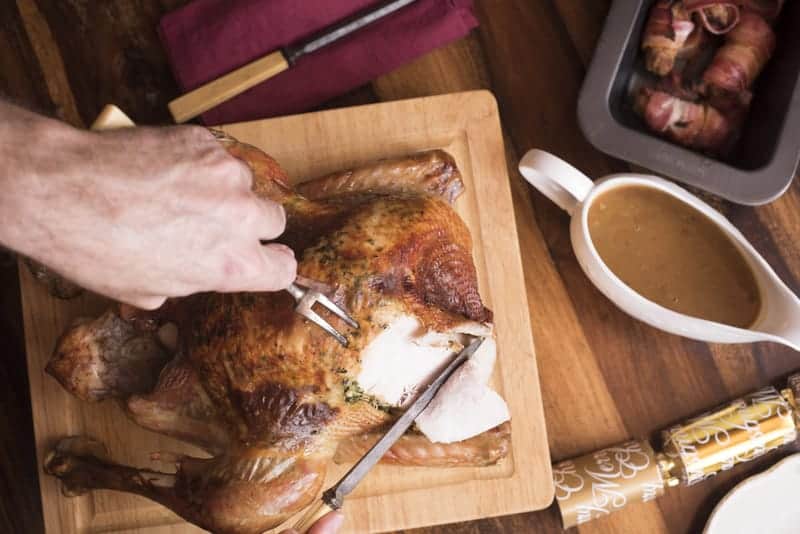 Carving a turkey in many ways looks like a daunting task; it’s such a huge bird that cutting through it can seem daunting and messy. In particular, it’s often hard to get a clean cut that looks picture perfect, which can be frustrating if you’re looking to make a good impression with your turkey dinner in terms of looks.

The interesting thing is, cutting a turkey up nice and neat is a whole lot simpler than it seems, and a very straightforward matter. The only issue is a matter of equipment, so to speak. 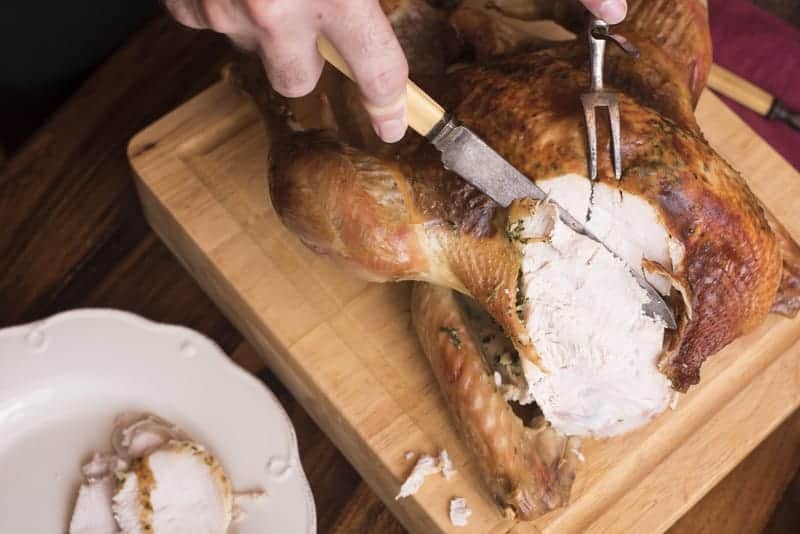 The biggest hurdle when it comes to neatly slicing up a turkey is in space. You need to clear off a whole long (and preferably wide) countertop to work with, because as you carve each piece off you’ll want to set it aside nice and neat. Your goal is to move the actual turkey as little as possible, and just whittle it down bit by bit.

That part, at least, is easy enough once you have everything set up right. The actual carving doesn’t require any specialized tools; just a clean countertop and a large cutting board (which you can do without on certain types of counters), plus a sturdy chef’s knife, preferably a 10 inch one, but an 8 incher will do in a pinch.

Once you have everything gathered up, just get started carving. You’ll want to start with the leg and thighs, neatly separating the skin and joints from the rest of the turkey. The joints might give you a little trouble, but with a heavy knife and a bit of leverage they should pop right off. Once you’ve pried off the thigh and drumstick combo, separate the two, and set your four new pieces of turkey aside.

You may cut the meat off the thigh if you desire, though many people like eating whole thighs on the plate, as the bone provides a bit of added flavor, similar to how the drumstick does.

Then, pop off the wing. You can technically do this by just slicing off the breast first, but I find the whole breast is a bit more wieldy if you lop off the wings first. Set aside with the legs and thighs.

The breast is the largest portion here, and the one with the most variance in presentation. In any case, you’ll want to pop one breast off the bone, and do the same for the other side afterward. The most common way to prepare the breast will be to lay it flat and slice it along the bias (i.e. diagonally starting at the thinnest end), leaving nice little relatively uniform chunks of meat. You can also slice the breast lengthwise to a desired thinness to make sandwich cuts.

And that’s really it as far as carving up the actual turkey goes. There are a few things you can do to change things up or make the job easier, however.

Use a Serrated Knife

Particularly, using an electric carving knife can make things way easier. Your average turkey has a lot of meat on its bones, and all that slicing can really start to cramp your hand, especially if your knife isn’t particularly sharp.

An electric carving knife uses two serrated blades, electrically propelled in a sawing motion, to quickly and easily slice through your meat similarly to how a chainsaw works by biting into and grinding up a bit of what it’s cutting into. An electric carving knife is great to have around for all sorts of large meats, in fact, and excels at slicing up ham as well.

If you don’t have an electric carving knife, you can also make things a bit easier on yourself by using a large serrated knife; I like to use a bread knife when making sandwich cuts particularly as it pulls a little bit of the meat around and makes it more tender.

So, you’re done with brining and preparing your turkey and now you might be tempted to quickly start tearing into your turkey, as it can be a lengthy affair, and people get impatient for food particularly during holiday events like Thanksgiving or Christmas.

However, letting the turkey sit and rest for 30 minutes or so is a good habit to get into. For one, the turkey will be cooler when you start cutting into it; no need to worry about burning yourself while pulling things around.

Resting also ensures the turkey will be juicier and all around more delicious; a lot of the stigma around turkey (particularly its breast) being dry and flavorless comes from impatient cooks tearing into the turkey the instant it’s done cooking.

The juicier meat will also be more firm, but less tough, allowing your knife to glide more easily through the meat.

Make Good Use of Space

As mentioned, having a good amount of space to work with is key…but being space limited isn’t an insurmountable task. You can even slice up a turkey beautifully without ever removing the whole from the roasting pan.

The key is patience and precision, as well as order of operations. Removing the thighs and legs first without cutting the bottom of the pan takes a bit of doing, but once done you’ll have a lot more space to work with.

One thing that can make a turkey much easier to cook is to debone it before heat ever touches it. This is an especially good idea if you plan to smoke the turkey, as getting that breast meat off the bone, bound, and wrapped will result in a much more delicious, easily sliced turkey breast than one cooked completely.

The thighs and drumsticks can then be cooked separately, and as they’ll often be finished sooner,: they can be enjoyed for lunch or as a snack while you wait!