How to Test and Calibrate Your Meat Thermometer 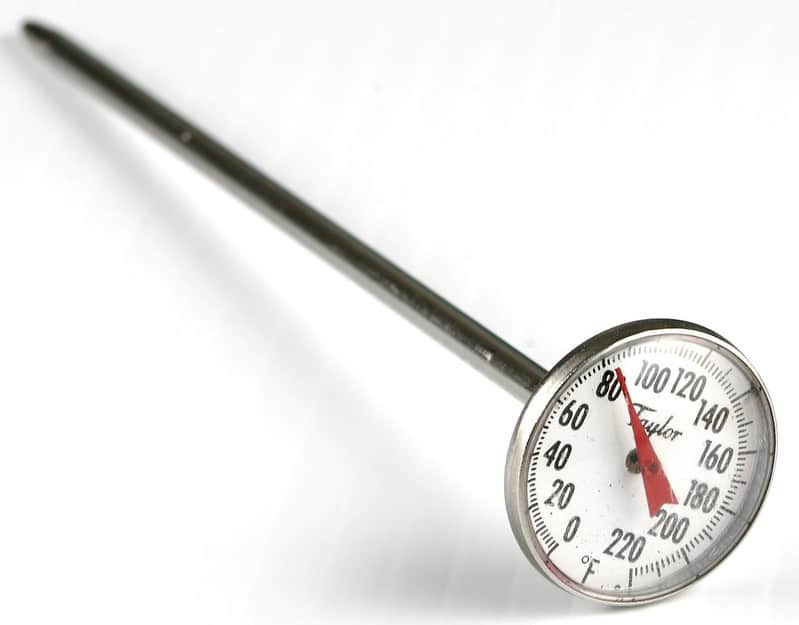 Your meat thermometer is one of the most important kitchen gadgets you can possess, and it will quite literally change the way you cook. No more guesswork and wondering when your food is properly done or not, it makes cooking steaks to perfection a breeze and smoking similarly easy.

However…all of this only applies if your meat thermometer is properly calibrated. And it can be difficult to tell if one is or not out of the box.

To that end, you need to perform a test to make sure the thermometer is reading the proper temperature, and thankfully this is fairly simple to do.

First, fill a cup or bowl with crushed ice, then fill the remaining space with water.

A tip to ensure accurate reading: don’t let your thermometer touch the glass at any point. Keep it away from any actual surface so it’s just submerged in the ice.

To avoid making a mess, also consider putting the glass in a bowl or pan. If you’re having trouble keeping the water icy, add more after filling the water to the brim.

Fill a large pot with water; preferably a pot that’s deep enough you can submerge a large portion of the thermometer without letting the tip touch the bottom or sides of the pot.

Bring the pot to a boil, then stick the thermometer in. If it reads 212 degrees Fahrenheit (or 100 degrees Celsius) then it’s working just fine. If not, you have a problem.

What Do I Do If My Thermometer Doesn’t Read Properly?

You have a few options, depending on your type of thermometer.

The first is to simply throw the thermometer away and get a new one. This is recommended if you’re using an old liquid thermometer that’s seen better days. Modern thermometers are just more accurate and simply safer; even though those kinds aren’t filled with mercury any more, the liquid in the new ones isn’t that great either. Likewise, if you’re using a cheap thermometer it might be easier to just get a newer, better one anyway since you’re probably going to have to recalibrate it fairly often.

The second option is to simply deal with it. After all, if your thermometer is a degree or two off…so what? Just make a note of it (mentally or otherwise) and adjust your temperature readings accordingly. If your thermometer always reads two degrees hotter than it actually is, you can just account for that when using it. You stick your thermometer in a cut of meat, wanting it to be 125 degrees Fahrenheit; your thermometer reads 127 degrees, and you know it’s at the right temperature. This is the laziest method by far, but it has its merits. You don’t really have to do anything, after all.

Your third option is to recalibrate it, which can be trickier depending on the type of thermometer you actually have.

For a mechanical thermometer (the kind that are like a big rod with a glass face and a dial that reads all the temperatures), you can sometimes recalibrate them manually, but it’s kind of a pain. Especially since it can sometimes be difficult to tell if they’re actually calibrated exactly to a degree or not since they tend to use very small, unlabeled pips in between the big temperature markers.

Look on the underside of the face. If there’s a little nut, you’re in luck. You can take a small wrench or some needle nose pliers and twist it in whichever direction it needs to go (left for lower, right for higher, typically) to read the right temperature while it’s stuck in either the cold or hot water. You can also just make a note of how many degrees off the temperature is and adjust accordingly.

If there’s not a nut…well, there’s always tossing it, dealing with it, or hoping it’s still under warranty.

Similarly, an electronic thermometer may or may not have a calibration button. If it does not, then chances are it was a fairly cheap little thermometer anyway, and can be safely tossed and replaced. While the “deal with it” option is still here, I don’t recommend it as much for these electronic thermometers, as they can often be wrong in different ways every time.

Mechanical thermometers have less accurate granular readouts, but you can trust them to read the same temperature every time even if that temperature is wrong. Electronic thermometers sometimes do that, but often are just off by a different measurement every time, so unless you like the idea of  texting your thermometer before and after every use, forget about it.

That calibration button will be your best friend if you have one though, and you should make a note to test and calibrate your electronic thermometer fairly regularly; every month or so maybe. A button like that makes it easy, especially if you use the hot water method (which is a bit less annoying to set up).

No matter what you do, keep in mind that no calibration is permanent, this goes just as well for digital as it does analog thermometers.

READ MORE: Tips on using thermometer in the oven.

What Do I Do If My Thermometer Doesn’t Read Properly?