How to Make Perfect Bratwurst on your Stovetop

Bratwurst are a classic German pork (usually) sausage I imagine most people have eaten at least once in their life. And if you’ve had bratwurst, chances are you’ve had it grilled. It is a classic sausage for grilling, and a great alternative to hot dogs for your backyard grilling needs.

The great thing about brats is that they’re versatile. You can eat them a ton of different ways, with or without a bun, smothered in barbeque sauce, with mustard of any sort, and even some more interesting ways (they make a great choice for curried sausages, for example).

That versatility extends to how you can cook them, as there’s really nothing about a grill that particularly enhances the flavor of a bratwurst, save the light addition of smoke if you’re using a charcoal grill.

This makes them a prime candidate for bringing your barbeque party indoors, whether it’s rainy day, you don’t have a grill, or just don’t feel like going outside one day.

The process is fairly simple. The main thing that changes when you bring bratwurst inside is that they’re a bit easier to scorch, since the heat is a lot more direct. So, you need to focus a bit more on keeping them from burning.

To that end, you need to do two things. The first, is to poke little holes in your brats; you can do this with a fork simply enough. Don’t go too crazy, but maybe two or three lines of holes on either side of the bratwurst. This will help it cook a little more evenly in the middle.

The second is to properly lubricate your pan. You should be doing this in a stainless steel or cast-iron skillet, for the higher heat, though an aluminum nonstick pan is fine in a pinch. In that case, there’s no need to do anything to the pan. Otherwise, use about a tablespoon of an oil of your choice, or a small pat of butter to coat the bottom of the pan. This will add a nice golden-brown sheen to your bratwurst, and give it a little flavor while ensuring it doesn’t stick to the pan.

Cook for about 10 minutes, flipping the brats halfway through cooking. When finished cooking, their temperature should read somewhere between 145 degrees and 160 degrees Fahrenheit. If you don’t have a meat thermometer, they should be “bouncy”. Pick them up on one side with your tongs (or by spearing them with a fork), and slap them against the pan lightly. If they flop, they need a bit more time. If they rebound, they’re good!

Most bratwurst from stores come precooked, by the by, so this mostly applies for homemade or deli bratwurst; the store-bought kind typically just need to be cooked until they’re warm in the middle to be good to go, as they’re technically safe to eat (though not very appetizing) out of the package.

Serve with your choice of condiments, and optionally a dark beer (traditionally a lager).

However, that’s just cooking the bratwurst themselves, for a quick lunch or something. You can do a whole lot more than that to turn them into a meal, or at least a larger component of one. Here’s a very simple recipe to up your bratwurst game. 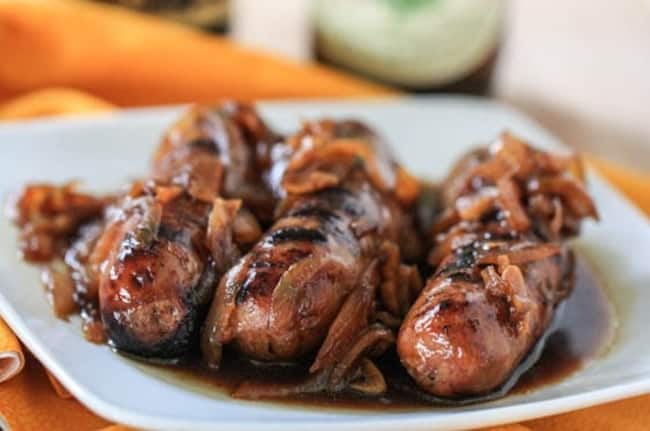 This is a classic, super easy recipe everyone should have in your back pocket. It also works with most sausages, though it works best with ones that have a bit of a sweeter tinge to them, like bratwurst do.

This calls for three ingredients:

That’s it! The proportions differ based on how many you’re cooking. Assuming four bratwursts, you’ll want about half a medium sized onion, and about 2 tablespoons of butter.

Sear all of your sausages on both sides, identically to above; about 5 minutes per side. Throw in your onions, and let them cook for a while until the onions caramelize (brown around the edges). Add 1 cup of dark beer (lagers work well, as do stouts) and simmer for a few more minutes, uncovered, until some of the beer has evaporated and it thickens a little bit (it won’t thicken much unless you add a thickener, however).

And that’s it! This makes the perfect accoutrement to many meals, and tastes great on a bun with some spicy mustard. If you’re feeling even saucier, there’s another fairly simple recipe that’s become a staple at my house on lazy days and weekdays I just can’t be bothered to cook. 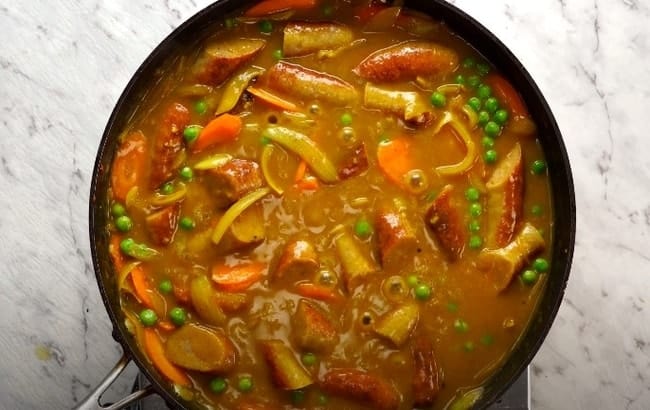 Another classic, simple recipe that’s great if you like marrying a variety of regional flavors; German brats, English gravy, and curry (this works with curry of any origin, whether it be Indian, Thai, or Japanese) melding into a very nice mix.

The base ingredients are simple, producing simply sausages and the curry sauce or gravy.

The recipe starts, as most do, with browning the sausages. You know the drill by now; add butter, heat up, add sausages, cook 5 minutes each side, and then remove.

Add your onion and garlic, adding a bit of extra butter or oil if you need it to get them nice and browned. Next deglaze with the chicken or vegetable stock (about 2 cups), making sure to really get in there and scrape up that delicious bratwurst flavor from the bottom.

Add your curry of choice; amounts will vary depending on method. A whole package of premade curry paste, or about a tablespoon of curry powder or jarred curry (add more to taste). Cook until thickened, adding a bit of flour if you’re using the powdered curry variant, just a little at a time until it reaches a gravy-like consistency.

Serve alongside rice or mashed potatoes, and other vegetables of your choice (you can toss these into the chicken or vegetable stock to simmer for a bit and cook through before adding the curry for an easy one pot meal!).

Annabelle is an experienced food writer and editor. She focuses on common sense, easy to replicate recipes formulated to help keep things fresh and exciting while fitting into her day to day life as a wife and mother. All her recipes are well tested in the home long before they make their way to you: guaranteed crowd pleasers for every occasion, from a simple home dinner to fun and fast entertaining ideas.She currently resides in New York, with her husband and two adorable children (who often double as her helpers!).