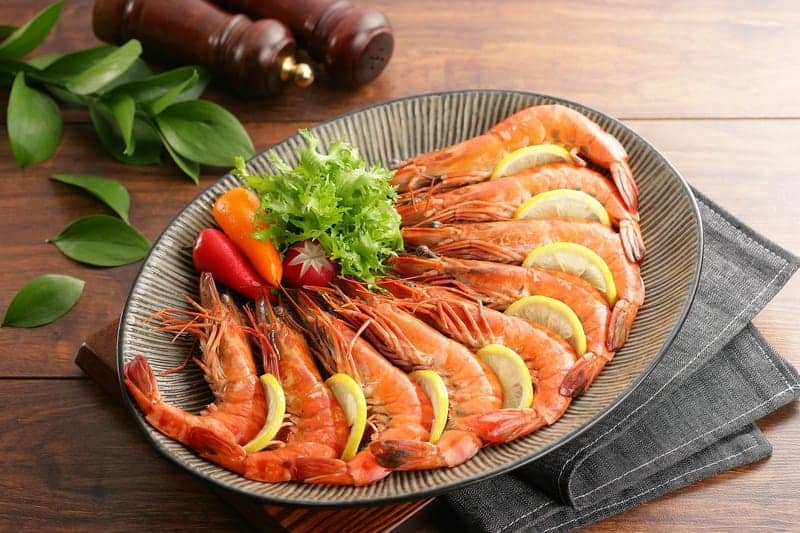 Shrimp is without a doubt one of the tastiest and nutritious seafoods. While low on calories, shrimp is rich in protein, vitamin B12, iron and phosphorus, which makes it a great substitute for lobster, crayfish and prawn. However, shrimp also has a fleshy texture, which lends itself well to a wide variety of cuisines.

Apart from its nutritional value, it is a highly versatile food, which can be prepared in different ways, including roasting, grilling and frying. Besides, all the above methods are easy and quick, which makes it one of the best seafood meals to cook at home.

So, in this post, we are going to look at the best way to cook a mouth-watering shrimp dinner, which will leave your taste buds tingling for more. However, before we jump right into the actual cooking, let us briefly go over the preparation process.

How to Shop for Shrimp?

There are a number of factors that you need to consider when purchasing shrimp. These include the size, freshness, frozen or fresh, head and tails, deveined or not deveined.

Each of these factors will determine the taste and preparation method. It is therefore vital to pay close attention to all of these elements before settling on the most ideal shrimp.

Picking the Right Size of Shrimp

The size of a shrimp is usually determined by the number of individual shrimp that make up a pound in weight. So, when you see the label 15/20, it means that between 15 and 20 of that particular size of shrimp make a pound in weight.

In some cases, you might find the letter ‘U’ followed by a number on the packaging for example, U15. This essentially means that fewer than 15 shrimps make a pound. The rule of thumb to keep in mind when buying shrimp is that the smaller the number, the bigger the shrimp.

Here is a general guide of the sizes of shrimp according to common labels:

How to Check for Freshness when Shopping for Shrimp?

Shrimp, just like other seafoods, are highly perishable. It is therefore important to know how to pick fresh shrimp when doing your shopping, not only for taste but also to ensure safety.

So, when buying shrimp, check for the smell of ammonia, which is a tell-tale sign of spoilt shrimp – be sure to ask your fishmonger to let you sniff the shrimp to determine whether they are fresh before making any purchase. You should also look out for shrimp that are slimy as well as those that are starting to break apart since those are signs of decay.

Another slightly sophisticated way of checking the freshness of shrimp is to look for black spots on the head of shrimp as well as the body. Avoid buying shrimp if they have these black spots since this indicates that they are not in peak freshness. Those black spots, known as melanosis typically appear due to oxidation.

It is worth noting that melanosis doesn’t necessarily mean that the shrimp is decayed – it simply indicates that it is not as fresh as it should be.

Should You Buy Frozen or Fresh Shrimp?

A majority of shrimp are often frozen at sea before being delivered to retail outlets like supermarkets and fish markets. Thereafter, the shrimp is left to thaw in freezers before being put on display.

As a result, it is quite difficult to tell how long a shrimp has been defrosted by the time you purchase it at the fish counter. For this reason, you are advised to buy them while still frozen and thaw at home. This provides you with more control over the thawing process, and ensures your shrimp doesn’t spend a lot of time outside the freezer before it is cooked.

In general, shrimp are frozen either in large five-pound blocks or using the Individually Quick Frozen method (IQF). I would highly recommend going for the latter since IQF shrimp usually show signs of little damage during the freezing process.

Furthermore, they are a lot easier to thaw, especially if you intend to prepare enough for a single meal and preserve the rest in an air tight seal.

When it comes shopping for shrimp, you have the option to purchase them with the heads and shells intact or removed. Personally, I prefer the former since it gives me more options on how to prepare the shrimp. I can choose to grill the shrimp with the heads on and remove them later, which gives the shrimp a distinctive flavor due to a bitter juice that is released.

On the other hand, shrimp heads can also have a negative impact on the quality of shrimp. This is because shrimp heads contain certain enzymes that start to break down the flesh as soon as shrimp dies. This usually causes the shrimp to become mushier, unlike those with their heads removed during freezing – which are noticeably crunchier.

Deveined or Not Deveined – Which Should You Buy?

The ‘vein’ of a shrimp is the digestive tract, which runs along the back of the shrimp, and it contains digested matter or poop. While the vein isn’t toxic or harmful, I wouldn’t recommend it, as it may cause the shrimp to taste bitter. Moreover, they often contain sand, which may ruin the texture of your meal.

While most retailers often remove the shell and devein the shrimp before freezing them, some sell the shrimp with all its parts intact. Nevertheless, deveining a shrimp is a very simple process that you can do yourself in a matter of seconds.

There are several methods that you can apply to devein a shrimp. One of the easiest involves using a pairing knife where you will use the cutting tool to make a shallow knife incision along the shell of the shrimp, from head to tail, and pulling out the vein. Alternatively, you can devein your shrimp using a special tool known as a deveiner, which removes the shell and deveins the shrimp in the blink of an eye.

There are three main types of shrimp, which are identified according to their color, namely, pink, brown and white.

Pink Shrimp – Despite the name, this variety of shrimp often comes in a wide spectrum of hues, ranging from white to gray. Pink shrimp can be identified by the dark blue coloring of their tail. However, this type of shrimp can also be recognized by a distinctive spot located on either side of the body, a few centimeters away from the tail.
Brown Shrimp – This type of shrimp tends to be smaller in size compared to other varieties, and can be identified by the purple coloring on their tails. They typically have a firm texture, and mildly strong flavor.
White Shrimp – This variety of shrimp can be identified by its light coloration and greenish tail. Moreover, they have a tender texture and sweet taste.

How to Thaw Frozen Shrimp?

Once you’ve purchased frozen shrimp from the market, you can easily thaw it yourself, just before you start cooking. The easiest method to thaw your food is through a microwave but there are other methods. Also, I prefer not to thaw it in the fridge overnight since this can cause histamine to build up, and possibly lead to digestive issues.

The best way to thaw your shrimp is by taking it out of its package, and putting it in a bowl. Thereafter, run cold water (over it) until it is no longer frozen. You can tell that the shrimp is properly thawed when it becomes soft and slightly translucent in color. Once you’ve thawed the shrimp, pat it with a dry paper towel to get rid of excess moisture.

How to Cook the Best Shrimp Dish?

First, heat a tablespoon of butter and one tablespoon of olive oil in a saute pan until all the butter melts. Swirl the mixture for a few seconds so that the oil and butter mix completely. I prefer using the two ingredients together, since oil has a higher smoking point, and will prevent the butter from burning.

After heating the garlic and pepper, add 22 medium shrimps to the pan and stir them as they cook for about 2 to 3 minutes. At this point, the shrimp should be pink in color and opaque.

Once the shrimp is ready, transfer it to a plate using a slotted spoon and leave the butter in the pan. Alternatively, you can serve the shrimp along with the butter for extra juiciness. Personally, I prefer to precook some noodles and throw them in the buttered pan together with the shrimp, for a quick and easy to make dinner. As another tip you can also try cooking on a grill basket if you want to make shrimp dinner immediately.

How to Tell When the Shrimp is Done?

Regardless of their size, shrimp usually cook in a matter of minutes on a stove, although small shrimp generally cook faster than larger ones. So you need to be careful to ensure they don’t overcook.

The great thing about shrimp is that you can easily tell when they are ready. Raw shrimp are typically translucent in color, with a flabby texture. Once they have cooked, they turn opaque with a pink color while the tails turn bright red.

It’s all very simple and straightforward

How Long Should You Marinate Shrimp?

This depends on the kind of marinade you are using. In case you are marinating with acidic agents such as lemon, lime and orange, you should marinate for not more than 30 minutes. If you do it for too long, the acid will start to break down the flesh, and you will end up with overly mushy shrimp.

What Should You Do With Shrimp Shells?

While most people prefer having the shell removed before preparing shrimp, cooking this seafood together with the shell can actually improve the flavor of the meat. Moreover, cooking shrimp with the shell intact helps to prevent the meat from overcooking quickly.

I would, therefore, recommend cooking the shell along with the shrimp whenever possible, especially when grilling. In case you are serving shrimp with a dip, you can leave the shell on the tail of the shrimp intact to serve as a handle.

When it comes to sea-food based meals, shrimp is without a doubt one of the fastest and easiest dishes to make. Not to mention that its in the tastiest and most nutritious seafoods category. The whole process, from preparation to cooking and serving takes less than 10 minutes. This makes shrimp one of the best meals to prepare for a quick dinner or lunch.

However, you should remember that shrimp, like most seafood, is highly perishable. You should therefore make a point to only buy frozen shrimp since they are more likely to be fresh.

That being said, cooking the best shrimp meal is quite doable, even if you’ve never tried it before. Of course, the first try might end up being a bit disappointing, but this need not discourage you from making this delightful dish. With the right mindset and a bit of practice, you will be making restaurant-style shrimp in no time!

How to Shop for Shrimp?

How to Thaw Frozen Shrimp?

How to Cook the Best Shrimp Dish?