A long-time contributor to GrillBabyGrill. Jim has had a lifelong relationship with the art of grilling, passed on from his father and grandfather to him. 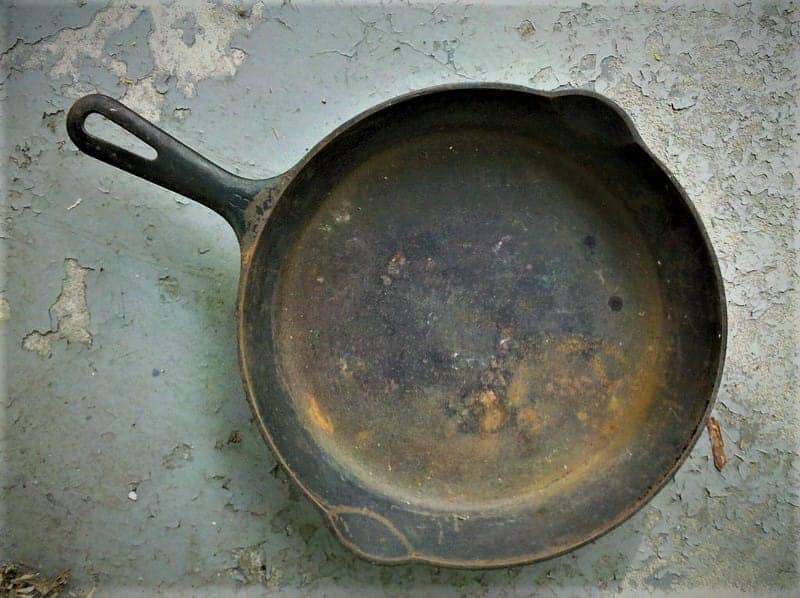 We’ve also found that some of the best cast iron skillets are those that you scrounge up at a rummage sale, at the thrift store or your local antiques market. These older skillets are often made of better cast iron, and are more heavy duty than what you can buy in the store today.

They also come in a range of conditions. Sure you can find pristine cast iron skillets, but most of the time, they are rusty, dirty and in need of some serious love. Don’t let this scare you. If you’re willing to put in a little elbow grease, you can have an amazing cast iron skillet in no time.

If you’ve got a cast iron skillet that you want to use, but it’s got a rust problem, you’ll need to take steps to restore the skillet before you use it. Restoring a rusty cast iron skillet is also called “seasoning”, this process prepares the skillet for cooking, and creates the amazing, natural, non-stick coating that we dream of.

1. Tools of the Trade

Restoring your cast iron skillet from rusty mess to a perfect piece of cookware does require a few tools. These are simple items, and you probably have most if not all of them in your kitchen or garage. When it comes to seasoning a rusty cast iron skillet, here are the items you’ll need to have on hand.

Steel wool or steel wool scrubbing pads – You can use a chunk of fine steel wool, or consider a steel wool scrubber. You can often buy these already infused with soap, which makes them a handy tool when removing rust from a cast iron skillet.
Dish soap – Use a soap with minimal fragrance, to keep the perfumes from sticking to the pan.
Scrubbing sponge, dish brush or scouring pad – Our preference is for a sponge that has a dish safe scrubber attached. Although, a good stiff bristle dish brush also works great.
Paper towels – You’ll need paper towels throughout this process. And using paper towels will also keep you from staining your dish towels with rust and residue.
Vegetable Oil – Crisco works great, but really any oil will work fine. If you don’t have vegetable oil or Crisco on hand, use what you have.
Oven – The oven is a must for seasoning your skillet, and is easier than other options.

The first step is getting rid of the rust. This can be a quick task or may take a few tries, depending on how thick the rust is. Use your steel wool or steel wool scrubbing pad to remove the rust. Work both the inside and outside of the skillet. A bit of water is helpful to seeing where rust is remaining and where it has been removed.

Once you’ve removed all of the rust, wash your skillet, with soap and water. This is the one time that we suggest that you use soap on your cast iron skillet. Because you’ll be re-seasoning the skillet later, it is fine to use soap in this step.

Also, you’ll want to get rid of old grease and dirt, especially if you’ve dug up your skillet someplace other than your cabinets. Don’t skimp on the scrubbing. Use your dish brush or scrubbing sponge to thoroughly clean your skillet. Rinse and dry with paper towels.

Since you’ve used soap on your skillet, you want to get a good layer of oil on the pan. And when we say the pan, we mean the whole thing. This includes the bottom and the handle.

Use a paper towel to coat the skillet evenly. You don’t need a ton of oil, but you do want to get a nice even coating.

Your oven should be to temperature by now. Place your skillet on the top rack, upside down. You will also want to place a piece of foil or a baking sheet on the bottom rack to catch any drips of oil. “Cook” the skillet for at least one hour.

Turn off the heat to the oven and let the pan cool before you handle it.

Now your skillet is ready to use. You’ll want to limit its exposure to water to avoid new rust build up. And don’t forget to season it periodically for an amazing non-stick surface.

Here are some other thoughts to help make seasoning a rusty skillet easier.

We’ve seen some skillets with really thick layers of rust. In these instances, you might not want to spend hours and hours scrubbing the pan. However, you don’t want to toss it either. Reach out to your local machine shop, they can sand off the rust layer in a matter of minutes, using power tools. Then you’re just left with the cleaning and seasoning steps.
If you’re struggling with rust on the inside of your pan, soak with a little warm water to loosen the rust.
Some people prefer to season their cast iron on the stove instead of in the oven. If you want to try this method, make sure you read up on the technique.
Yes you can buy commercially produced cast iron seasoning oil. If you want to go this direction, that’s up to you but we find that vegetable oil is really the best option.

1. Tools of the Trade