The Right Way to Season a Cast Iron Skillet 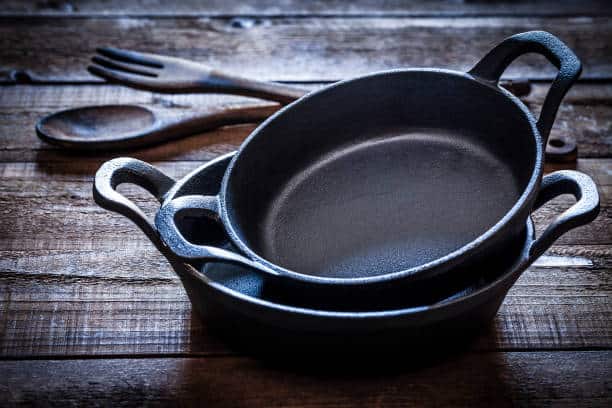 The Right Way to Season a Cast Iron Skillet

No doubt, cast iron skillets are proving to be a must-have tool in the kitchen. After all, they conduct, distribute and retain heat fairly well compared to other materials, making them the perfect option for precision cooking.

Besides, cast iron works well with a variety of heat sources ranging from stovetops to open fires, and you can use your skillet to sear, grill or even bake different types of delicacies without your food burning or sticking onto the pan. Its non-stickiness is what makes cast iron skillets stand out from the rest.

However, for your skillet to develop this non-stick coat and prevent hot spots from forming, you have to season it the first time you use it and continuously during its lifetime.

This explainer defines what seasoning is all about and it discusses the best way to season a cast iron skillet.

Seasoning refers to the process of treating a non-stick frying pan with a thin layer of heated vegetable oil in order to create a non-porous coating on the cooking surface. The non-stick surface prevents food from sticking on the skillet and it reduces the amount of oil you use when cooking.

When heated in a cast iron pan, the oil bonds with the metal subsequently creating a layer of seasoning through a process known as polymerization. The formed layer is corrosion-resistant and non-stick.

Using a seasoned skillet comes in handy especially if you are cooking foods that tend to latch on the pan. You can use a seasoned cast iron skillet to fry eggs or sear steak without adding cooking fat or oil. Your food will skim across smoothly as if the pan had enough oil for cooking.

Then again, seasoning protects your skillet from rusting when exposed to humid air or moisture. As you probably know, iron is a highly corrosive material, meaning it can catch rust within minutes of exposure to moisture or humidity.

With this in mind, it is important to season your skillet right before using it if you want to enjoy the long-term benefits of this frying pan for generations to come.

Please note that some activities such as scrubbing with scouring pads, cooking acidic foods or using excessive heat could remove the seasoning from the skillet. For this reason, it is imperative to season your skillet with oil after each use to make sure the non-stick layer remains intact.

Seasoning a new cast iron skillet might seem intimidating at first, but the truth is that it is an easy job. In fact, you can do it yourself at home without requiring extra help so long as you follow the right procedure.

Fortunately, most new cast iron skillets come with a user manual with instructions on how to season a pan. Some skillets come pre-seasoned, further making your work much easier.

If you misplaced your instructions booklet, you can browse the internet for the right info. However, take extra care when browsing the web and make sure you verify the sources of the info, as the internet has a lot of misleading information nowadays.

Thankfully, we are here to set the record straight. Here are the steps on how to season your skillet correctly.

The easiest way to season your cast iron pan or skillet is to cook with the skillet as usual and as often as you can. The skillet will build up seasoning gradually, over time forming an ultra-slick surface. However, you must heat oil or fat on the pan every time you use it to build up the non-stick surface.

Here are the steps:

Start by washing the skillet with soap and warm water. In case your skillet is new, it has probably exchanged hands several times before ending up in your kitchen. Whether new or used, washing it will remove dirt, stuck food particles and contaminants, before you start  seasoning.

Normally, you shouldn’t use soap when washing cast iron, as it is likely to corrode the surface. However, using soap is fine for this procedure since the skillet will be seasoned afterwards. Then again, be extra careful not to use scouring pads to avoid scratching the skillet.

Rinse with clean water and dry thoroughly using a lint free cloth or paper towel. Make sure the skillet is completely dry as any moisture or water droplets remaining could hinder the process. To avoid taking chances, place the skillet on a stovetop flame for a couple of minutes to remove any lingering water.

STEP 4: COOK WITH YOUR SKILLET NORMALLY

Cook your food with the skillet, as you would normally do until it is ready to serve. Repeat the same procedure from Step 1 to Step 4 every time you want to cook your food using the skillet, and it will build up a layer of seasoning naturally over time. However, avoid using soap when washing the skillet to prevent corrosion.

Seasoning a Skillet in the Oven

If you want the skillet to have a thicker, more resilient, and ultra slick coating right from the onset, then you are advised to season the pan in your oven. This method is similarly easy, and it is an excellent way to build a base non-stick layer that will grow stronger and stronger every time you cook using the skillet. But if you don’t have an oven this process will guide you.

Here are the steps:

Wash the cast iron skillet with warm soapy water to remove stuck food or dirt. Preferably, you should use mild soap to avoid corroding the pan. Furthermore, scrub with a sponge instead of a scouring pad to avoid causing scratches on the non-stick coating and removing the pre-seasoned layer on the skillet.

Rinse the skillet in clean water and dry thoroughly using a lint-free cloth or paper towels. Place the skillet on a stovetop flame for one or two minutes to get rid of any surface moisture that could be remaining. This is important since any lingering water on the skillet could hinder the process and form hot spots on the skillet.

Once the cast iron skillet is clean and dry, apply a thin layer of oil throughout the surface of the pan, including the interior, exterior, bottom and handle. You may use regular cooking oil, vegetable oil or your favorite shortening.

Give it a good rub and then buff the skillet thoroughly to remove any excess oil. Failure to remove excess oil could cause pooling when seasoning the skillet.

Preheat the oven to 350-450 degrees Fahrenheit. In the meantime, make sure your kitchen is well ventilated, as the process could get a bit smoky, especially as the layer of oil polymerizes.

The reason why an oven is the best option for seasoning the skillet is that it provides even heat. The oven will distribute heat evenly throughout the skillet for an effective initial seasoning. Stovetops and other burners will create hot spots and ruin your skillet.

Place the oiled skillet upside down on a middle-oven rack and leave it to bake for 30-60 minutes depending on its size. You may place a sheet of aluminum foil beneath the skillet, on the lower rack, to catch drips. Turn off the heat and allow the skillet to cool inside the oven before removing it.

Sometimes, seasoning your skillet once might not be enough to form the smooth, shiny and non-stick layer you want. For this reason, it is always a good idea to repeat the oiling and heating process 3-4 times after the initial seasoning.

For this, you need to take out the skillet from the oven while it is still hot and rub it with oil and then return it in the oven for 30 minutes. Do this 3 or 4 times every 30 minutes until you get the desired result. Make sure you wear oven mitts when handling a hot skillet to protect your hands from burns.

Interestingly, you have to season the skillet over again to ensure it does not lose its non-stick coating. The good news is that future seasoning sessions are not as involved as the first one. All you have to do is to cook with your seasoned skillet as usual, and it will build up more seasoning gradually.

The process is extremely easy. However, you have to make sure you add a little bit of fat or oil when cooking so that the skillet may build up another good layer of seasoning in the process.

What are the Best Oils for Seasoning?

The process does not require any special oils or fats. However, for best optimum results, we recommend you use vegetable oil or shortening for seasoning cast iron skillets.

Vegetable oil is safe and healthy. Besides, it does not have any harsh chemicals that could corrode the skillet or cause harm to your health.

Most importantly, vegetable oil consists of polyunsaturated fatty acids that speed up the polymerization process. These acids have the ability to harden quickly when exposed to air thus forming a thick, smooth finish on your skillet during seasoning.

Other oils you can use for seasoning include:

Some of these oils tend to leave a conspicuous flavor on your skillet, but most of them have a neutral flavor.

How to Maintain Seasoning

Your skillet might lose some of its seasoning over time. Here are some tips on how you can keep the non-stick coating intact.

Using excessive heat when cooking can polymerize the layer of seasoning on your skillet and cause it to lose its non-stickiness much faster. This is particularly true during the initial stages after seasoning. To protect your skillet, always use low to medium heat until the pan has acquired sufficient seasoning build up.

Never wash cast iron skillets with soap to avoid corrosion. Then again, do not scrub the skillet with scouring pads, as this will remove the layer of coating formed during seasoning.

Do not use abrasive cooking utensils

Instead of using metal utensils that could cause scratches and dents, opt for wooden spoons when cooking on a previously seasoned cast iron skillet.

Acidic foods such as tomatoes, wine and vinegar may react to the seasoning layer subsequently causing it to peel away. Moreover, the chippings from the coating might mix with your food further causing unpleasant flavors.

Do not simmer food for long

Instead of using your freshly seasoned skillet, always use an alternative cooking pot when simmering food. This will preserve the non-stick coating for longer until the skillet is seasoned adequately and ready to withstand long hours of cooking.

One of the reasons why many professional chefs and home cooks love cast iron cooking is because the equipment is very easy to maintain. Cast iron skillets do not require much maintenance other than cleaning.

Moreover, you do not need to go through the entire seasoning process again and again. In any case, the skillet will be seasoning on its own every time you cook with your skillet.

What are the Best Oils for Seasoning?

How to Maintain Seasoning