We hope you love the products we recommend. GrillBabyGrill.com may earn a commission on qualifying purchases from Amazon Associates or other vendors. Read more here. 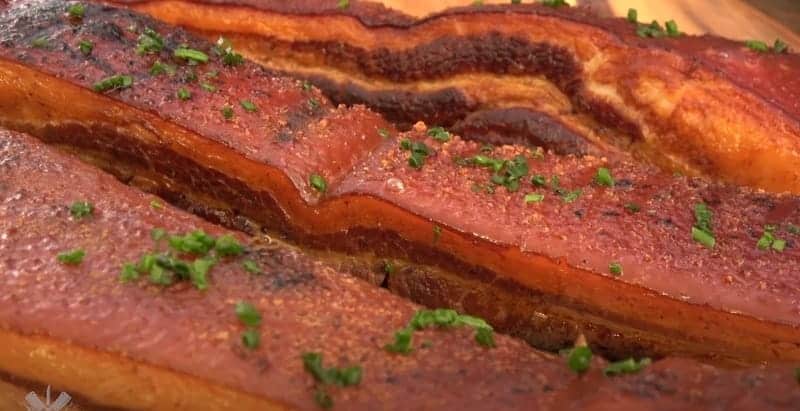 If you are feeling a little bit adventurous and eager to learn new cooking methods, then consider having a go with Sous-Vide-Que.

Sous-Vide-Que is a French term that loosely translates to ‘under vacuum’. As suggested by its name, Sous-vide refers to low-temperature long time cooking, whereby you place your food in a plastic and cook it in a water bath under controlled temperature.

When cooking, you have to seal your food in a croak and add your marinade, spices, and herbs before dropping it in a temperature-controlled water bath.

The technique could take up to 18 hours, depending on the thickness of the flesh. At the end of it all, you’ll certainly get to enjoy tasty, moist and tender meat just the way you like it.

This recipe will teach you how to prepare your pork belly meat by employing the Sous-Vide-Que cooking method.

Before you start preparing your pork belly, set up the Sous-vide immersion circulator. The Sous-vide circulator is a standalone precision cooker that boils and circulates heated water around the large pot that contains the sealed food, in order to maintain the temperatures evenly.

Setting up the immersion circulator to reach the desired temperature does not have to be a difficult task. After all, the device comes with a detailed instructions handbook.

Ideally, you should set the water temperature to between 160 degrees and 165 degrees Fahrenheit.

Making the marinade is equally easy. Simply combine all the ingredients, including vinegar, honey, sugar, sesame cooking oil, mirin, and soy sauce, in a medium-sized bowl and blend them well.

The mixture might be lumpy at first, but whisking the ingredients thoroughly will break up the lumps appropriately.

Once the mixture is set, place the bowl containing the marinade in your refrigerator until it is ready for use.

Ideally, the skin of the pork belly should remain intact. You should not remove the membrane since the Sous-vide-Que style of cooking will soften the skin and add more flavor to the meat.

Conversely, you should make diagonal cuts on the top layer of the pork. Using a sharp knife, make vertical and horizontal cuts on the skin to create a crosshatch pattern. However, you should take extra care not to cut into the meat.

STEP 4 – Place the Pork Belly in a Sealable Freezer Bag

Now, place your pork in a large, sealable bag and add the marinade. But first, make sure you remove as much air as possible from the bag and ensure that the sealable bag is airtight before placing it in a water bath.

Thereafter, massage the pork belly using your hands until the marinade covers the meat adequately. Once you are done, submerge the bag in the water bath and Sous-Vide the meat for 16-18 hours.

Alternatively, you may submerge the sealable bag in a container filled with an equal mix of water and ice to reduce the meat’s temperature and make it easier to refrigerate. This is essential if you do not want to eat and finish the pork belly right away.

STEP 5 – Set Up Your Grill for Indirect Cooking

As you are aware by now, Sous-vide-Que entails heating your pork belly in a sealed bag placed in a water bath. After several hours of cooking, the next step involves grilling and smoking the meat in indirect heat.

Preferably, you should use a charcoal grill. Prepare your grill by creating two cooking zones. One zone should remain unheated with no flames, while the other side should have preheated charcoal briquettes.

If you are using an electric or a gas grill, adjust the knobs so that one side is off while the other is heated, and bring the temperature to 225 degrees Fahrenheit on the indirect cooking zone.

STEP 6 – Remove the Pork Belly from the Bag

When your grill is ready, carefully remove the pork from the heated water and allow the meat to cool. You may place it in your refrigerator to cool it quickly.

Now, remove the pork belly from the sealable bag and pat it dry using a lint free towel or a paper towel.

Once dry, place your delicious pork belly with the skin side up in the indirect cooking zone, far away from the heat as possible. The reason for this is to prevent the pork from burning or charring.

Position the top vent of the grill directly above the cool cooking zone, to force the smoke formed over and around your pork.

Smoke the pork belly for about 45 minutes until the meat attains an internal temperature of 185 degrees Fahrenheit. You may confirm the temperature using a meat thermometer.

Grill the pork for about 5 minutes over direct heat while flipping it periodically until it turns brown and crisp. Ensure that both sides of the meat are evenly browned before removing it from the grill.

Your pork belly is now ready for serving. Remove the meat from the grill and then slice it into several pieces. Serve immediately when still hot with your favorite sides.

Alternatively, you may choose to refrigerate the slices and reheat them later in a skillet over medium heat. However, if you want to enjoy the original taste of the Smoked Sous-Vide-Que Pork Belly Recipe, you can only refrigerate the meat for a maximum of two days.