Should You Cook a Pork Shoulder with the Fat Cap Facing Down or Up? 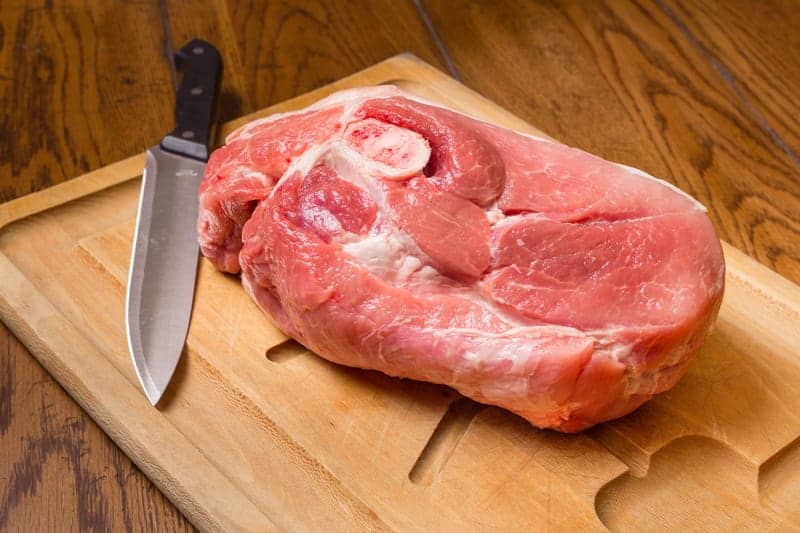 Pork shoulders (also known as a Boston Butt roast) is one of the more common large cuts of pork you’re likely to cook. They’re relatively inexpensive, and very forgiving to cook, as well as hugely versatile. You can cook them pretty much anyway you like; roasted, slow cooked, and of course smoked, and the roast will come out beautifully no matter which method you decide to use.

But there’s one little bit of debate when it comes to cooking your pork shoulder: which way do you cook it?

Each pork shoulder has a large fat cap on one side; sometimes up to an inch thick. As you cook the pork, the fat cap will slowly melt and render down, and will become usable for other things, the same way you would save and use beef trimmings for later. No matter how you cook the pork, the fat is going to render down like that and add to the flavor of the meat, though this can be overkill sometimes; if you have a particularly thick fat cap the correct answer is always going to start with “trim it down some”.

There are strong arguments for cooking your pork shoulder with the fat cap up, or down. Let’s go over a few.

1. Reasons to Cook with the Fat Cap Up

The main thing here is your pork becomes “self-basting” in some ways. It’s much less likely to dry out, particularly if you’re slow cooking it in a Crock Pot or something similar. This won’t take the place of a more regular and deliberate basting process, but it helps a little bit, and the more enclosed your pork shoulder is when cooking, the more it will help.

On the other hand, the self-basting ability also means that it’s going to wash away a ton of your spices. If you use a heavy rub (as you would normally do for barbequing) a lot of that is going to metaphorically go down the drain.

This means cooking with the fat cap up might be better, generally, for anything but smoking, or if you want a lighter flavor on your pork.

2. Reasons to Cook with the Fat Cap Down

On the other hand, cooking with the fat cap down brings a few benefits as well. Primarily, it helps protect your meat from being charred or burnt by whatever cooking method you’re using. That makes this particularly good for smoking in some ways, since it helps prevent unwanted charring on the bottom of your roast.

Of course, while your meat won’t be burning, something else might be: the fat itself. Drippings are flammable, and tend to…well, drip. Depending on the design of your grill or smoker, you’re going to have to worry about flare ups, which can be killer on the lifespan of your grill, and create nasty, acrid smoke that ruins the flavor of your meat.

Flipping your pork shoulder is definitely an option, and potentially a great one. It has some of the benefits of both other methods; it helps baste your meat, and when you flip it to the fat side being down, it helps prevent the meat from charring.

Of course, when it comes to smoking, you also have all the drawbacks as well. It will wash away your barbeque rub, potentially cause flare ups, and all around be a pain in that regard.

Worse, opening up your smoker repeatedly to flip it is going to throw your temperature calcs out of whack, potentially messing up the cook, which is not a desirable outcome.

When it comes to roasting or slow cooking though, I thoroughly recommend this as the best option; flip it about halfway through cooking, starting with the fat cap on the bottom. The top half will now be submerged in the liquid, and remain moist if it hadn’t dried out already; the ft won’t reabsorb, but it won’t lose too much more moisture this way.

Drain the fat off and use it for something else later, and you have a great roast.

SO WHICH IS BETTER?

The true answer here is “it depends”. The consensus among cooking experts seems to be that you should change whether the fat cap faces down or up based on the source of the heat you’re cooking with.

So for barbequing or slow cooking, it’s generally going to be best to place the fat cap downward, at least to start. This provides extra insulation from the heat coming from the bottom.

Of course it can be much more complicated than that for smokers, which often have deceptive heating spots; while the fire may be offset and trend toward the bottom, the heat may actually be primarily focused from the top. In this case you’d want to flip it over so the fat cap is facing up.

The same goes for if you’re roasting the pork shoulder in your oven or something.

In essence, the main thing you want to achieve is to use the fat cap to protect the meat from the heat, so it doesn’t overcook. The extra benefits of each individual method are largely irrelevant; they’re small, incremental boosts that can be achieved by other cooking methods. What really matters is preventing your meat from burning, so focus on that.

1. Reasons to Cook with the Fat Cap Up

2. Reasons to Cook with the Fat Cap Down

So Which is Better?