What’s the Difference Between a Sauce and a Glaze?

In a lot of different types of cooking worldwide, liquid seasonings are used whether you’re making American barbeque, Asian dishes, a French sandwich, or all sorts of other foods, sauces and glazes are a universal constant among culinary styles.

What is a Sauce and What is a Glaze?

The two words are used almost interchangeably…at least until somebody decides to call you on it when you get it wrong by their perception. For those invested in the specific terminology, cooking terms are insanely serious business…though to most people they don’t really matter all that much when it’s this pedantic.

For the short version: a sauce is thinner but “goopier”; viscous without being sticky. Sauces are used for dipping or as a finishing sauce once the cooking is already done. They’re also quite complex, being made of a plethora of different ingredients.

Glazes are significantly sweeter, with fewer ingredients. They’re made to be very sticky (but fairly thin), reducing down and adhering to the surface of food during cooking. You also typically cook food inside of a glaze, or with the glaze already on it when you put it to the heat. Glazes bond to the food, while sauces typically still drip off of it.

This is, I think, a bit too simplistic though. And a largely academic point.

There are plenty of things referred to as a sauce that don’t really fit that definition. Pasta sauce, as an example, is essentially the centerpiece of many Italian dishes. It also doesn’t exactly fit either definition. It’s definitely not a glaze, but it’s certainly not the same thing as, say, a barbeque sauce.

Likewise, there are many different kinds of glazes, and they don’t all really fit the same bill either, with only the “sweetness” part really sticking around. Some glazes stay soft and sticky, while some (particularly candy glazes) are hard and crackly when finished.

Even in the most strict of definitions, the difference between a sauce and a glaze is extremely thin.

As a quick example, many add barbeque sauce to finish off things like ribs and smoked meats of various kinds. This sauce often boils down, sticks to the meat, and forms a kind of “crust” on the meat.

…This is essentially identical to a glaze.

A Better Way to Categorize

It might be easier to think of glazes as a subset of sauce, then. All glazes are sauces, but not all sauces are glazes. This clears up a bit of confusion when it comes to differentiating between the two, as you can then go by the more physical features rather than the use (which can be nearly identical for both).

But it doesn’t completely satisfy, in my opinion. There’s a bit of inconsistency with it, so let’s take things a step further: a glaze is any sufficiently reduced sauce.

This brings things like pizza sauce back into the fold, as it fits more the definition of a thicker, more viscous sauce that is allowed to remain “saucy” and goopy even after cooking.

This is contrasted to a sauce that is used as a glaze, which will thicken, adhere, and essentially become an indistinguishable part of the main dish. This is best exemplified by the difference between hot wings and something like General Tso’s Chicken. Both are spicy chicken dishes, however both are distinct, and not just in the flavor. Hot wings are definitively sauced. It remains thin, and a common problem with hot wings is the sauce sliding off the wings themselves. In the case of General Tso’s chicken, and other Asian glazed dishes, the glaze is inseparable from the dish save by stripping off all of the breading, and sometimes not even then (if the breading is thin like it’s supposed to be, you can’t tear it of without shredding the chicken too).

This is the definition I favor, as you might be able to tell. It’s the one that makes the most sense to me. I’d even go a step further and say that a glaze is not even its own thing. There’s not really any such thing as a glaze: glazing is merely a process involving the caramelization of sugar combined with the reduction of other liquids. 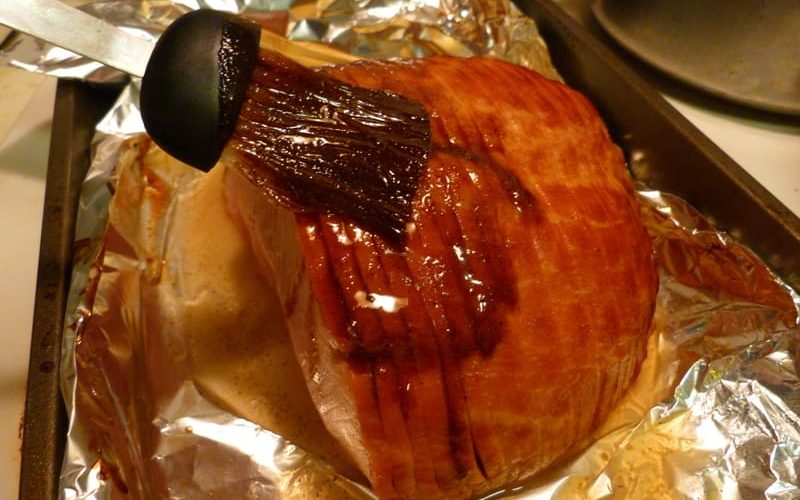 Is honey technically a glaze? No, but you can easily glaze a ham with it, without adding any other ingredients (and it’s delicious, as most people know).

Is a cherry a glaze? Not on its own, but if you add some water, wring the juices out of it, mash it up, and reduce it before spreading it on your ribs, it’s absolutely heavenly with its mix of tart and sweetness as they blend with the meat.

So on, and so forth. Glazing is a state of mind, not just something you buy in a bottle.

So, does the difference between glazes and sauces really matter? Not in the grand scheme of things, honestly. Even in the cases of distinct “sauces” I’ve mentioned (like wing sauce) you can actually make them glaze quite easily. The sweetness will cut the heat a little bit, but if you start at a level hotter than you think you need to, this won’t be a problem in the slightest.

I’d actually even recommend this method of adding a bit of honey, or brown sugar, or whatever else sweet you’re sitting on to your wing sauce to make it stick better. It fixes a lot of the issues you’re likely to run into with homemade wings.

Ultimately, this topic is probably not going to come up in your daily life, but if it does hopefully this helped you prepare some counter arguments for whatever pedant starts going “Um, actually…” at you when you get the two terms mixed up.

READ MORE: SPOILED HOT SAUCE – What are the signs?

What is a Sauce and What is a Glaze?

A Better Way to Categorize