Jim Bob – A long-time contributor to GrillBabyGrill. Jim has had a lifelong relationship with the art of grilling, passed on from his father and grandfather to him. 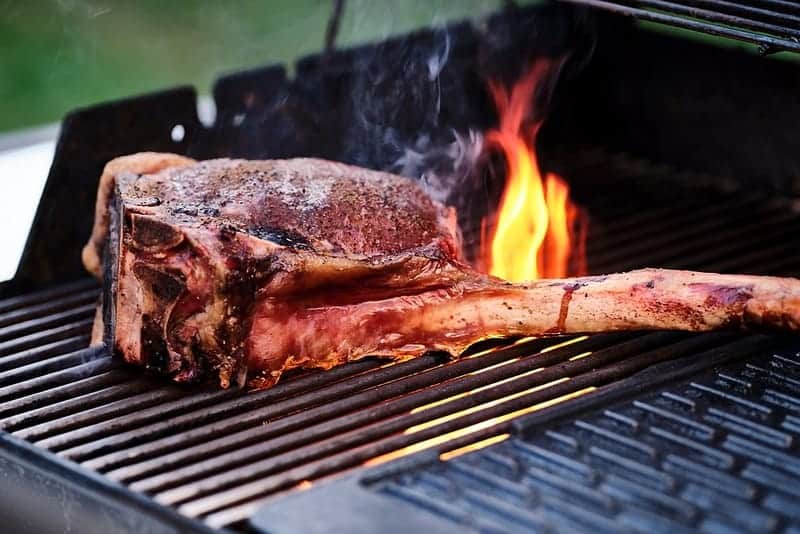 Grilling outdoors is a favorite pastime for many, and there are many types of grills to choose from. If you want to add a unique flair to foods cooked on the grill, choose a grill that includes a searing burner. While you can sear your foods directly on the grill, a burner simplifies the process and takes less time.

Searing food is a treat to anyone enjoying the food straight off the grill, and the techniques are easy to learn. Knowing how to efficiently use a searing burner on your gas grill will lead to less time spent regulating your grill’s temperature and more time enjoying a great meal with family and friends.

What Does Searing Mean?

You may have heard of the searing method and may even be doing it already without realizing it. Searing is the sudden scorching or browning of a food’s exterior by exposing it to intense heat for a short period. It consists of heating a surface to maximum heat, laying the meat on it for a short time, flipping it over for equal exposure, then moving it to a lower heated surface to continue cooking internally.

The process pleasantly browns the outer exterior and adds an intense, flavorful layer. In addition, this layer contrasts yet complements the flavors and textures of the meat’s interior once it is cooked to the desired doneness.

The browning and added flavor produced by the searing is a result of the caramelization effect. Searing a steak over the burner causes caramelization of the proteins and sugars on the steak’s exterior, adding the crispy, flavorful layer.

You can sear various foods, including steaks, other cuts of beef, chicken, and fish.

What is a Searing Burner?

A searing burner, or station, is a separate, designated area on your grill designed to create an intense, higher heat zone via an infrared plate. This designated space allows for quick searing of your food and makes it easy to remove it once seared and palace it on the grill grates for slower, less heat-intensive interior cooking to take place.

Certain grills come with more than one burner closely situated together for a wider searing surface area. These are ideal for those cooking for larger groups or larger cuts of meat or fish fillets.

Learning how to use a searing burner on a gas grill is relatively easy, and with a bit of practice using these top tips, you can perfect your technique and serve deliciously seared meats every time.

Best Tips for Using a Searing Burner on a Gas Grill

Light the grill and preheat the searing burner by selecting its high setting. This may take up to 20 or more minutes.
Apply a light coating of a nonstick cooking spray to the burner. Avoid olive oil, butter, or types of oil that will burn and smoke excessively at high temperatures.
Thaw meat completely or bring fresh meat to room temperature before patting it dry with paper towels to remove any remaining moisture.
Season it according to your preferences but avoid adding black pepper before searing. Black pepper tends to burn at such high temperatures. While it carbonizes, the resulting taste is often bitter.
Lower the temperature on the grill itself to a medium-low, creating a separate cooking zone for post-searing.
Place meat on the searing burner of the gas grill. Times will vary depending on the meat’s thickness, but a general timing is 1-3 minutes on each side.
Use non-sharp tongs to avoid piercing the meat when maneuvering it on the burner and turning it over. Any such piercing will release moisture better kept inside.
Move meat to the medium-heat grill grates and close the lid.
Continuously monitor with a meat thermometer to be sure it continues to cook internally at the right temperature for the desired doneness.
Remove from the grill, let cool, and enjoy.

Become familiar with how to use a searing burner on a gas grill, and you’ll find yourself using it more and more often. Once you realize you can have that added flavor and texture with little effort, you may never go back to using a grill without one of these remarkable features.

Reverse Searing as Another Option

Another option for using this gas grill feature is reverse searing, which involves cooking the meat to your desired doneness first, then exposing it to intense direct heat for browning.

Once the meat’s internal temperature is to your liking, lightly coat the exterior with oil and place on the hot searing burner for a few minutes on each side. A caramelized crust will form with a deep mahogany hue.

Follow these step-by-step directions to perfectly reverse sear a ribeye or any other cut of steak.

Select ribeye steaks at least 1 1/2” in thickness. Bring to room temperature, pat dry, and season with salt or a dry rub.
Light your grill and burner to a fairly low temperature, between 225°F and 250°F.
Insert a digital probe thermometer to the middle of your ribeye and place it on the grill. Close grill and monitor the internal temperature until it reaches desired doneness.
Remove steaks from your grill and cover with foil. Set aside.
Turn up the heat on the searing burner to the highest setting.
Brush steaks with a light coat of oil and place on a searing burner, allowing 2-3 minutes for each side.
Remove and serve. If done correctly, the steak will be juicy on the inside and crispy on the outside.

If you want to sear your meat, nothing is easier than using a searing burner on a gas grill followed by some time on the grill for further cooking. You can expect a contrasting and highly complementary combination of flavors and textures, adding yet another advantage to having a top-of-the-line grill for all your outdoor cooking.

What Does Searing Mean?

What is a Searing Burner?

Best Tips for Using a Searing Burner on a Gas Grill

Reverse Searing as Another Option

Jim has had a lifelong relationship with the art of grilling, passed on from his father and grandfather to him. To him, grilling is more than just a way to cookit’s a way of life, and his travels have taken him far and wide, around the country and beyond to find the best there is in grilling and techniques. Every product he reviews is painstakingly looked over and tested using his extensive knowledge of the craft and personal experience. He currently lives in Tennessee, though never stays in one place for long.