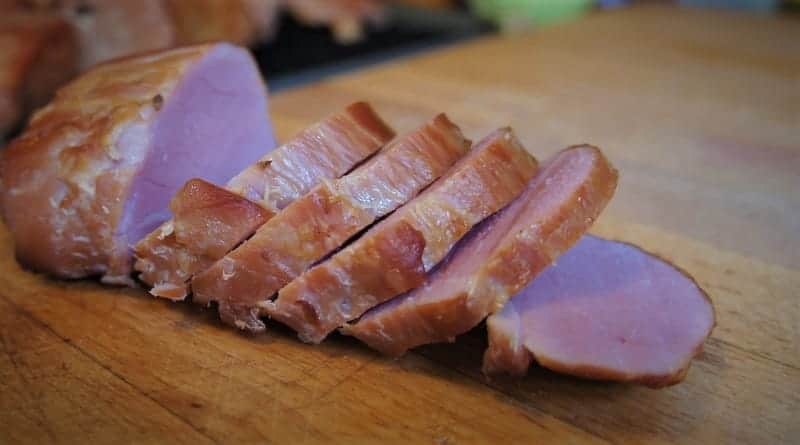 Would you have believed it if we told you that you could make smoked Canadian bacon at home?

You do not have to live in Canada to enjoy this delicious bite. If the only Canadian bacon you’ve ever tasted was on a pizza, then this is your lucky day. We are going to show you how to make this appetizing delicacy in awhile.

But first, here are a few things you need to know about this recipe:

Canadian bacon is known as “Back Bacon” in Canada

What Americans call Canadian bacon is actually back bacon or peameal bacon in Canada. It comes from the loin cut from pig’s back, hence its name.

Moreover, the meat has to be cured for about a week or two to give it an authentic taste and make it softer before it’s smoked in a smoke grill.

How to Choose Loin Meat for Canadian bacon?

To avoid being picked out in the butcher shop, it’s important to know how to select the perfect meat for your Canadian bacon recipe. Many people often ask at the butchery for Canadian bacon, but the right term for this should be back bacon.

As suggested by its name, back bacon comes from the loin area of the pig. The meat is leaner and it tastes strikingly similar to ham hence the occasional confusion.

For this particular recipe, you’ll need to buy boneless loin rather than tenderloin to make the perfect smoked Canadian bacon.

What’s the Point of Curing Meat?

The main objective of curing your pork loin or any type of meat for that matter is to preserve it and prevent the growth of microbes that cause food poisoning. You’ll also discover later that curing adds a specific delicious flavor to your meat.

The process of curing involves using various preservatives such as salt, brine, garlic and brown sugar on your meat.There are three different methods of curing meat. These include:

For Canadian bacon, we recommend wet curing. This entails submerging your meat in a liquid mixture of salts, nitrates and other flavorings. Wet curing is ideal for smoked Canadian bacon because you can control the amount of salt used.

Besides, wet curing prevent hot spots by ensuring that the whole meat is cured rather than leave out other areas as it is the case with dry curing.

Now that you already know how to choose and cure your back bacon, here are the steps on how to make great tasting smoked Canadian bacon at home.

To make the curing solution, combine 1 quart of water with all the other ingredients except the loin, in a large, non-reactive pot. Bring the mixture to boil over medium heat while stirring occasionally to dissolve the salts and sugar.

Note that the garlic will not dissolve completely, but this should not be a concern in any way.

Remove the pot from heat after approximately 3 minutes and add the remaining 3 quart of water. Stir the mixture for a few minutes and then leave it to cool. Cover the pot and place it in the fridge until the brine is completely chilled.

Pork loin or back bacon is a lot leaner than the American bacon. In fact, the meat to fat ratio is approximately 10:1. And since the meat is thicker, it’ll take a longer time to cure.

With this in mind, you have to scrub the meat to remove excess fat and bacteria and subsequently shorten the curing period. DO NOT use soap when scrubbing the meat.

Slice the loin into two or three pieces depending on the weight. If the meat is 4 to 6 pounds, you can trim it into two equal pieces.

Now, place each piece of the trimmed pork loin in heavy-duty zip lock freezer bags. Pour the chilled brine evenly into each freezer bag and squeeze out excess air before sealing them tightly.

Place the freezer bags on a tray and transfer them to your fridge. Leave the bags in the freezer for 10 to 14 days, but remember to flip each bag daily during this period to ensure an even brine.

After about 10 days, your pork should be cured and ready for cooking. Remove the pieces from the freezer bags and submerge them in a large container filled with fresh water.

Allow the pork loins to sit in the water for 30 minutes before removing them. Doing so will remove excess concentration of salt from the meat.

Rinse and dry the pork using a lint free towel or paper towels. To dry the meat faster, place them on a wire rack for enhanced air circulation.

The pork requires sufficient exposure to air when drying to form pellicle, which is a tacky layer that gives the meat its flavor and color. For best results, position and switch on a fan to blow cool air over the meat for a couple of hours.

It’s time to fire up the smoker! Set up your smoker according to the instructions tailored for it.

Place your meat in the grill and heat your smoker to 250-325 degrees Fahrenheit until the internal temperature of the thickest part of the pork loin reaches 145 degrees. This should take anywhere between 2 and 3 hours.

Depending on the type of smoker you have, you may need to add chips of wood to prevent the smoker from stalling at lower temperatures.

Remove the bacon from the smoker and allow it to cool for about 30 minutes.

To serve, simply slice the pork loins and pan fry in oil or without oil.

Canadian bacon is known as “Back Bacon” in Canada

How to Choose Loin Meat for Canadian bacon?

What’s the Point of Curing Meat?