How to Make a Moist Turkey Every Time by Brining and Injecting?

Turkey is a controversial food in a lot of ways. It’s the quintessential holiday food; most people think it’s not Thanksgiving without turkey, and many partake of the giant sized fowl for Christmas gatherings as well.

But when pressed on the matter, a lot of people will say they don’t actually like turkey that much. It’s try, and tasteless, and there’s not enough dark meat to go around (turkey is primarily white meat), and why couldn’t we have just made a chicken instead?

Turkey is naturally a bit tough and dry, and the cooking process doesn’t do wonders for that impression at all, wringing most of what little moisture is left in the turkey out and resulting in dry, tasteless, and most egregiously TOUGH slabs of white meat whose only saving grace is the very nice gravy you can make from the giblets.

But it doesn’t have to be that way. There are two relatively simple techniques that can turn eating turkey from a chore into a delight: brining, and injecting. Both work wonders, and they can be used separately or even combined for added flavor and juiciness (though there are a few drawbacks to doing both). With this quick tutorial, you’ll be making turkey like a pro in no time!

1. How to Brine Your Turkey? 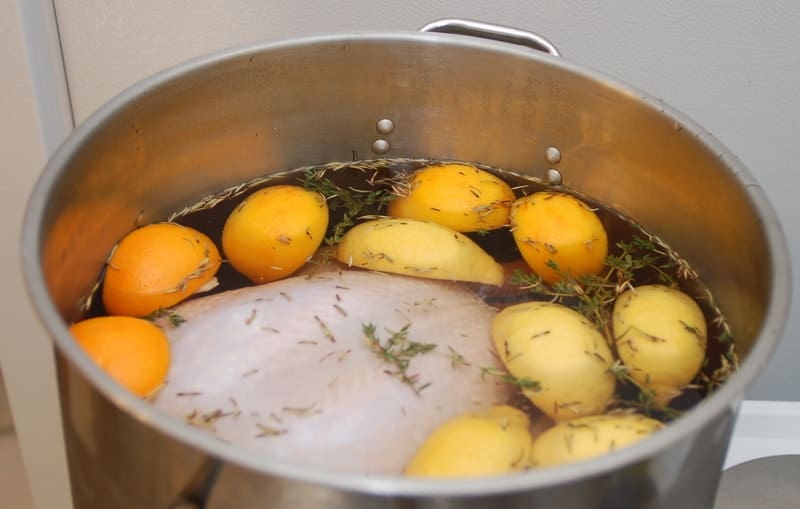 Brining a turkey involves soaking it for a long period of time (about 24 hours) in cold saltwater. The concept is simple, and all you really need to know about it is the cold saltwater acts like a soothing bath for the turkey. It works out all that tension, loosening up the muscle fibers and making them more palatable.

It also, of course, makes the turkey a whole lot SALTIER, so remember to keep that in mind when you’re doing whatever it is you do to season the turkey in addition to the brining process. It might even be best to completely omit salt from the rest of the seasoning, or drastically cut it.

However, you can’t just toss the turkey into some water, dump a bunch of salt in there, and call it a day. Too much salt will actually have the opposite of the intended effect, so you need to measure it properly.

Roughly, you want a ¾ cup of kosher salt per gallon of water (kosher salt comes in bigger flakes than standard table salt so it dissolves more easily). Definitely no more, and no less if you can help it. This is about a 6% concentration of salt, which is the optimal for these purposes.

Note that if you have a large turkey, then you can brine on a turkey fryer if you have one. Also, If you’re having trouble getting the salt to dissolve, heat up some of your water (not to boiling, but to a fairly high heat which you might need to use a thermometer) and dissolve the water there to make an extra concentrated salt solution. Then, mix it with your cooler water to cool it down to at least room temperature (toss some ice cubes in there if you want to speed up the process), and once it’s cool add your turkey. It doesn’t need to be completely submerged or anything, but make sure your roasting pan or whatever you’re putting the turkey into has high enough sides that the water doesn’t slosh over.

Put the pan in your fridge for at least 24 hours before cooking, and you’re good to go!

2. How to Inject Your Turkey? 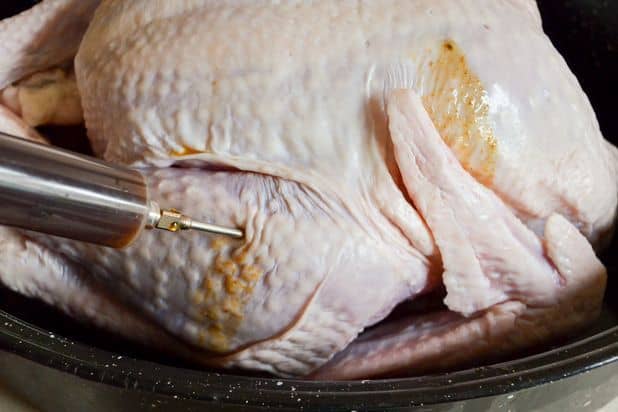 Injecting a turkey is exactly what it sounds like. You take a big syringe, suck up some nice flavoring, jab it in the turkey and give it a shot. Repeat in different parts until you’re out of the flavoring.

Choosing what KIND of flavoring is the important bit here. It needs to be thin, so the syringe doesn’t get clogged up. Instead of using thick seasonings, you’re stuck with only stuff that can be dissolved in water or oil.

Oil is the more likely option here, as you can get a lot more flavor out of something like melted butter with a bit of extra seasoning to it than you would just water with some flavoring in it. You can add a ton of other liquid seasonings as well; things like Worcestershire sauce , alcohols (bourbon is a classic one), citrus juice, and anything else that tickles your fancy.

into the flesh of the turkey. Make sure you get every spot as thoroughly as you can. Also watch out for spits, as pressurized liquid can shoot quite far when it’s squeezed somewhere with little space else to go.

A quick note: you can also “inject brine” your turkey with a simple salt water solution at roughly 6% saturation; about 1-2 tablespoons of salt (err toward the latter if using kosher salt since it’s larger, less dense flakes) for 2 cups of water. Inject as normal.

This is mostly for if you don’t like the hassle of a traditional wet brining and plan to season your turkey in some other way, such as simply rubbing flavored butter under the skin (messy, but effective, and my preferred way of seasoning turkey).

Each of the options has its pros and cons.

Wet brining has few cons in terms of the effect, but it’s a real hassle, especially when refrigerator space is at a premium. The main thing to watch out for is that many store bought turkeys come pre-brined; Butterball turkeys are probably the biggest brand to look for here. In this case, brining the turkey AGAIN is typically going to result in an exceptionally salty turkey. Look for an organic or otherwise untouched turkey that isn’t listed as being soaked in a special solution before brining.

Injecting is an easier process, though in my experience results in a less even coating of flavor than other methods. If you’re only going to do one, I suggest doing the brining, followed by a slathering of the turkey. But you can do both, or even all three, and it will turn out well. I just wouldn’t do an injection alone unless you’re injection brining.

You can use any method as long as the end result will be a well-prepared turkey ready to be grilled on a charcoal grill or if you’d like smoking, make sure to use a method that won’t leave the meat shriveled up. If you’ve followed the suggestions above, you’ll ensure that meat is easy to slice and delicious to taste.

1. How to Brine Your Turkey?

2. How to Inject Your Turkey?