The ThermoPro TP03 is not the flashiest meat thermometer out there. It doesn’t have very many unique features or abilities, unlike many others in the ThermoPro line, and doesn’t stand out in many ways among the crowd of other similar meat thermometers.

However, that doesn’t mean it has no merit in its own right. This thermometer’s simplicity is enough to recommend it to a subset of consumers: beginners.

For the beginner home cook, there are a lot of kitchen tools they need to buy. Some can be done without for quite a while, and a meat thermometer is one of them. But eventually, if you want to start upping your game in the kitchen, you need some more accurate measuring equipment and higher quality kitchen tools.

The ThermoPro TP03 is an excellent jumping on point for your first meat thermometer.

The main feature it brings to the table is usability. It’s extremely easy to use, with only two buttons you need to worry about. On the front, you have your power button, and then on the back is a very small button which will swap your thermometer between reading out Fahrenheit or Celsius. This is a good feature even if you live here in the US, as it allows you to use international recipes more easily; no more doing messy conversions (you’ll have enough of that to do with the package amounts and measurements you might need).

The length on this one is good, though again nothing special. Fully extended the whole thermometer is 10.4 inches long, giving you a lot of room to work with if you need to maneuver the thermometer a little awkwardly (such as into your oven while something’s baking or broiling in there).

The probe itself is only 3.9 inches, however, so it can be a little bit harder to make use of in some cases. Reaching the center of a thick piece of meat like a whole turkey or large ham can be a bit harder, so sometimes you’ll need to make educated guesses based on the temperature of what you’re actually reaching; if it takes too long to hit your target temperature where you stick it, maybe give it a few extra minutes to warm up in the middle to make sure.

The handle is comfortable and easily used for any purpose. While not ergonomically shaped or anything, it has a simple enough design that it fits well in any hand. The only real exception is if you have especially thick fingers or large hands, in which case it will feel a bit awkward, given how light and thin it is.

The accuracy in general is great though, reading the temperature to within plus or minus .9 degrees Fahrenheit, so great for all but the most sensitive of tasks, which you likely won’t be embarking on anyway (and if you do, you’d be better off buying a more sensitive thermometer, generally one specialized to whatever task you’re performing like a candy thermometer).

Likewise, the temperature range reads out in any common temperature range you’ll need, going from -58 degrees Fahrenheit to 572 degrees Fahrenheit (or -50 degrees Celsius to 300 degrees Celsius). Generally speaking, you won’t need the extreme ends of either of those scales, but they’re good to have for insurance; it’s safe up to such high temperatures that there’s no way you’ll ever need to worry about the safety of the device, and can use it to do stuff like read the temperature of oil fairly easily (though wear heat resistant gloves if you do that since the probe is so short).

The temperature readout comes down fairly quick, in under 5 seconds on average. Not the fastest on the market, but unless you’re extremely impatient, it’s enough to get the job done well enough. The only potential problem I can see between 5 second and 3 or 2 second readout models is when searing a steak over extremely high heat, if you want it to come out fully rare, every second counts. 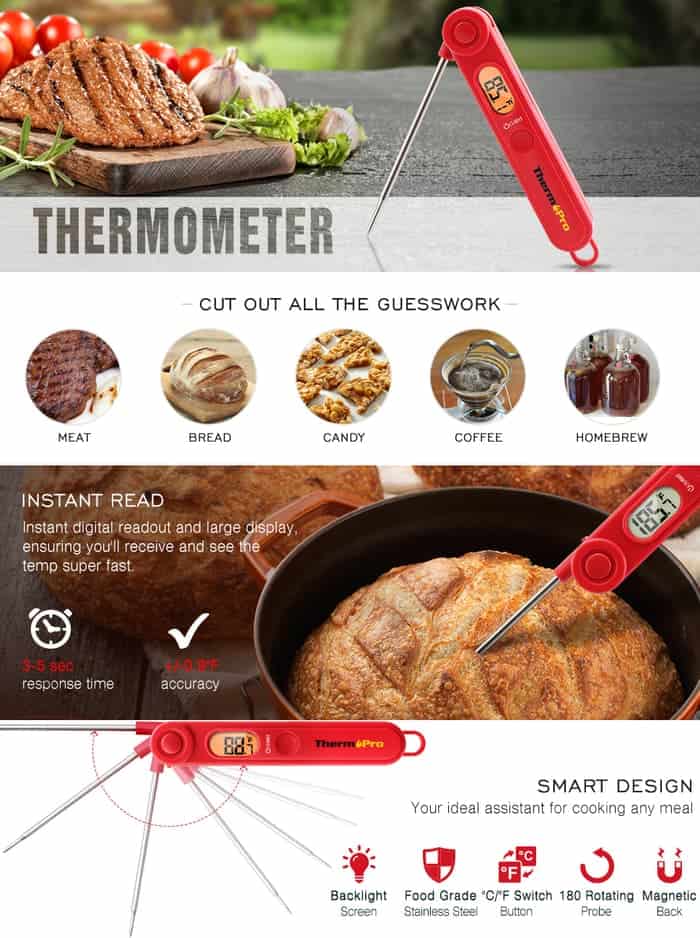 The first is the auto shutoff feature. After 10 minutes of inactivity, it will shut down on its own. This doesn’t sound like much, but it will end up saving you a lot of battery life over time, at least if you’re like me. I have a tendency to set aside my meat thermometer after using and only clean it when I’m truly done; sometimes I’ll walk away from it for over a half hour or more without folding it up, since I don’t want to gunk up the little niche for the probe. This saves me about 20 minutes of battery life, and it’s a great feature to look for in any meat thermometer.

Combined with that, it has two nice easy storage features. The first is the simplest; it has a little ring on the back that makes it great for hanging on a hook. If you like to set up hanging hooks around your kitchen for utensils, this slots very easily on one of those.

More interestingly, it has a magnet on the back. I love magnets on small kitchen tools like this, so you can just slap them on the front of your fridge or even oven when not in use; or if you’re grilling outdoors, you can set it on the side table and not have to worry about it getting knocked off easily.

Combined with the performance, you get a plethora of quality of life features to round out the thermometer’s design, and all things considered, while it may not have a lot going for it on the surface, this makes for a great introduction to meat thermometers for a very reasonable price.