We hope you love the products we recommend. GrillBabyGrill.com may earn a commission on qualifying purchases from Amazon Associates or other vendors. Read more here.

ThermoPro is more well known for the extreme ends of their product scale, with the ultra cheap options like the TP03, and the higher end, ultra advanced meat thermometers like the TP08s and the TP20 that cost a bit more but bring a ton of quality of life features to the table.

Less is said though of the middle of the curve, which is where the TP-17 we’ll be talking about today falls.

The interesting thing about the TP-17 is that in terms of performance, it’s an equal to the higher end models in almost every respect.

Understanding the Components of the Thermometer

The unit comes with two meat probes, each of which is stepped down for easier piercing and stability. The probes can be used entirely independently, to either measure the temperature of two different kinds of meat, or leave one as an ambient temperature reader so you know how hot the grill itself is.

The probes are made of stainless steel all around; the pokey bits themselves being solid, and the wires being standard electrical wires wrapped in a flexible steel sheath for added durability and longevity. The steel mesh is rated for 716 degrees Fahrenheit, so is good in any grill or smoker (though would not be recommended for high temperature ovens like a pizza oven), though the probes themselves are not as highly heat rated; do not let them touch fire directly.

The thermometer is fairly accurate, with readings falling within 1.8 degrees Fahrenheit (1 degree Celsius) of the listed number in either direction. The secondary meat probe is the one that is more likely to have discrepancies, with the primary probe being typically more accurate when tested, which makes sense when one is meant to be an ambient probe primarily.

The display is very simplistic but easy enough to read, and the buttons are simply labeled and easy to press. The display comes with a number of presets for any common meat you’d care to grill or smoke, and can be set with both high and low temperature alarms for ease of use for both smoking and grilling purposes.

Comparison with other ThermoPro Models

All of these things are provided by the higher end ThermoPro models as well, leaving the TP-17 as a very satisfying meat thermometer in terms of raw performance. It does everything you need it to, and at half the price of something like the TP20.

Well, the main thing is that this meat thermometer is annoying to use, compared to the TP20 or TP08s. In those cases what you’re paying for is CONVENIENCE, and honestly I’d be more inclined to do so than dealing with annoyances when I’m just trying to enjoy my smoking.

To offset the TP-17’s admirable performance specifications, it lacks pretty much every quality of life feature you might expect. It’s a much older model thermometer than the TP20 or TP08s and it shows, with those later models learning from the mistakes made by the older generations of ThermoPro meat thermometers.

The display is easy to read…in the daytime. Otherwise, it’s an obnoxious hassle to look at in the dark. While it does have a backlit display, it’s not always on. And in fact, cannot be permanently turned on; on hitting the button for the backlight the display flashes blue for a few moments before turning dark again. This can be very obnoxious if you’re having a hard time seeing the readout for other reasons.

Likewise, the presets are a bit outdated. The USDA guidelines for meat have been updated extensively to not be so stringent on meat temperatures, particularly for beef. The preset for beef is most likely to result in a well done steak over any truly palatable cooking temperature, which is unacceptable for meat thermometer.

The others are likewise set a bit high, but this is more forgivable for something like pork, which tends to get more delicious (if in a different way) the longer it’s cooked. As a result, it’s typically better to just ignore the presets entirely and set your desired temperature by hand every time, which basically results in there being a bunch of wasted buttons on this thing. 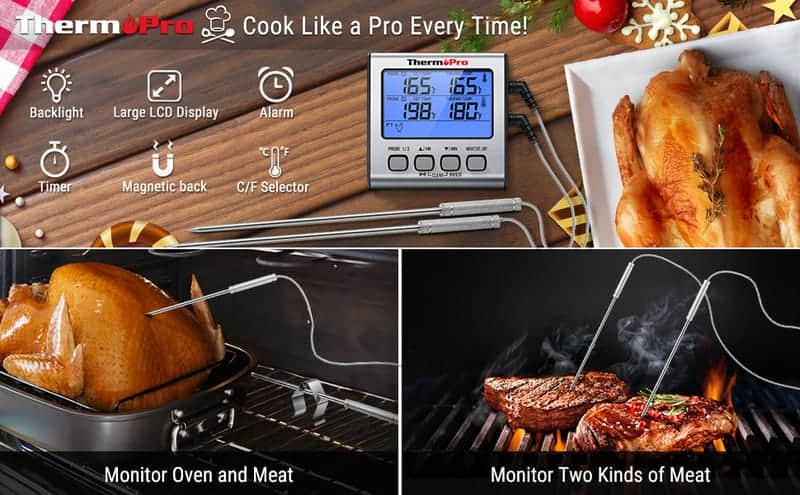 The TP-17 is likewise not a wireless model, so there’s no way to remotely monitor the temperature. This can make things a hassle on long smokes, as it means you need to more directly go out and check the temperature much more often than you would with the TP08s during long smoking sessions. This is probably better for grilling, but you don’t typically need a meat probe like this for simple grilling, or at least not as much; a spot reader will do you just as well in most circumstances for that.

The casing is also not moisture resistant or splash proof, so you need to be careful with it.

The only real concession to convenience the  TP-17 has is the mount, which is nice. It has a magnetic backing so can be stuck straight to the grill without issue. It can also be sat straight up by flipping that mount out and using it as a kickstand.

All in all, out of the list of important BBQ tools to own, I think the TP-17 is a fine meat thermometer, it’s hard to recommend it over one of the more advanced models, particularly the TP08s (since it’s not very much more expensive in the grand scheme). However, if all you really want is a fairly simple dual meat probe thermometer, you can do a whole lot worse.

Understanding the Components of the Thermometer

Comparison with other ThermoPro Models